TwilioQuest is an Electron desktop application (opens new window) - Electron allows developers to use HTML, CSS, and JavaScript to build applications that run like a native desktop app. Apps you use every day, like Slack, Discord, and Visual Studio Code use Electron under the hood.

The TwilioQuest game client reads in many game assets at runtime from the filesystem - like event scripts, written tutorial content, and level maps. Before version 3.2 of TwilioQuest, this content could only be read from inside the compressed and signed game bundle that gets downloaded to your computer. Enabling extensions allows TwilioQuest to look for those assets in another folder in your computer as well. This is what allows you to create new levels, objectives, and other content inside your extension project. 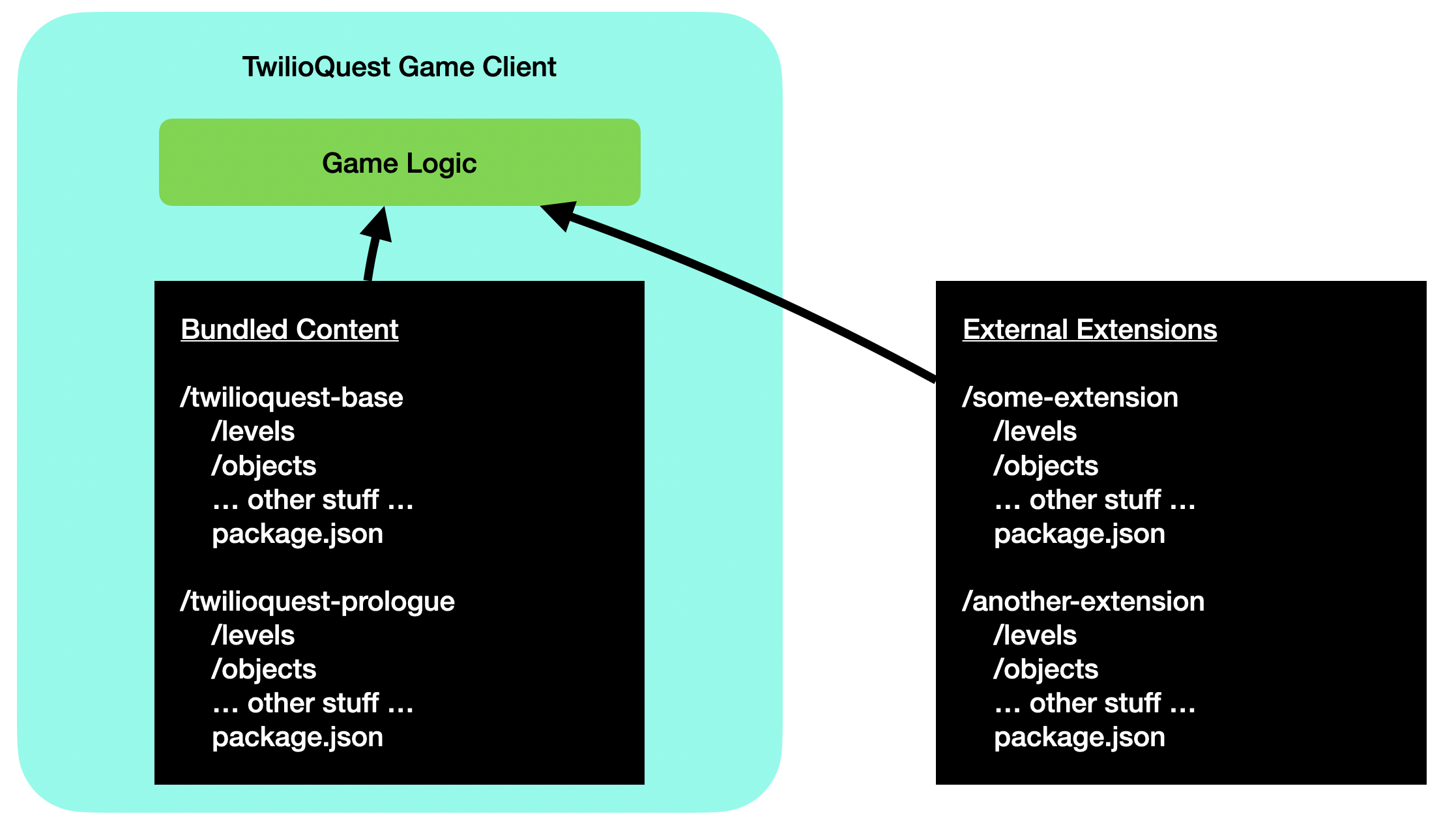 The structure of the external extensions folder, and the extensions within, is the same structure as the folder of game assets that ship along with the game. When extensions are enabled, you are merely telling TwilioQuest "hey - you can look for game assets in this other folder, too, not just the one in the game bundle".

All content for the game, whether it is packaged and shipped with the game by default or loaded as an extension, is an npm package (opens new window). An extension folder will have a structure similar to this.

The levels folder is where you will define new explorable areas for TwilioQuest. Each level folder will contain:

The objects folder contains custom objects you may want to add to the game.

The tilesets folder is where you can store your own custom Tiled map editor (opens new window) tileset files. If you used the extension template (opens new window), it is already pre-configured with the tilesets we use to build TwilioQuest, so you may not need to work directly with this folder very often.

The package.json file at the root of this directory is where you will configure your extension as a Node.js package (opens new window). If you need to install third-party Node.js libraries, you will do so here. In the future, we also plan to make use of the engines configuration property so you can specify which versions of TwilioQuest your extension supports.

# Resolving the path to game assets

When TwilioQuest wants to load a game asset - whether it's a map file for a level or the configuration for an in-game object of some kind - it will use an asset loader that looks for files in either the built-in game bundle, or the extensions folder if extensions have been enabled.

If the player wants to go to a level whose configuration can be found at the path levels/fog_owl/level.json (this is the file path for the main Fog Owl level that acts as the hub for most of the game), it will attempt to "look up" that file by iterating through every content folder (starting with extension folders) and return the first "hit". 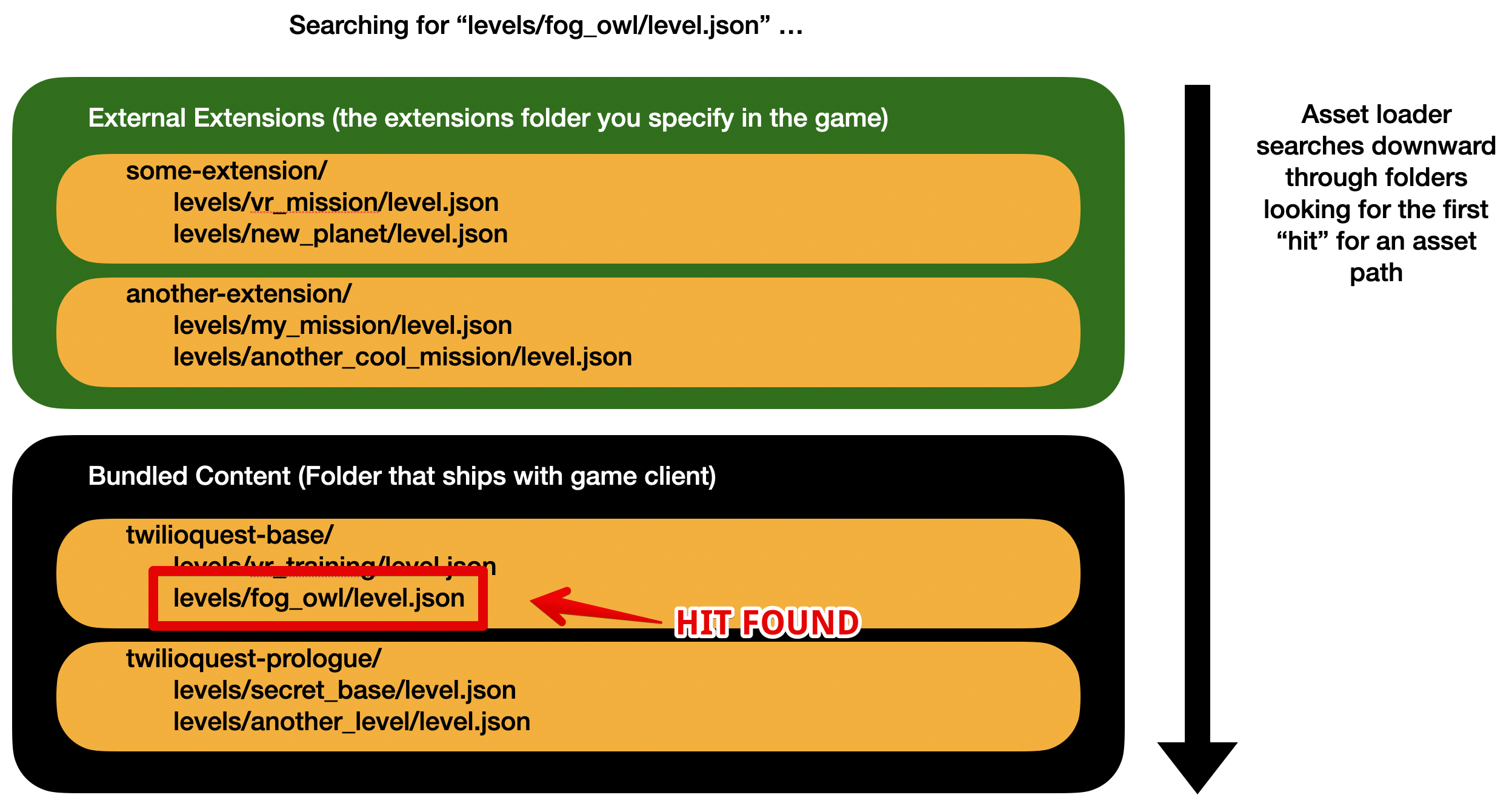 If all extensions provide new content at different file paths, then TwilioQuest will always load the one and only version of an asset that exists. However, it is possible for extensions to override other extensions as well. The asset loader will return the first "hit" that it finds. Let's say that the author of some-extension wanted to override the level configuration for the Fog Owl. They could create a file in their extension at the path levels/fog_owl/level.json, and the game would load that version of the file instead. 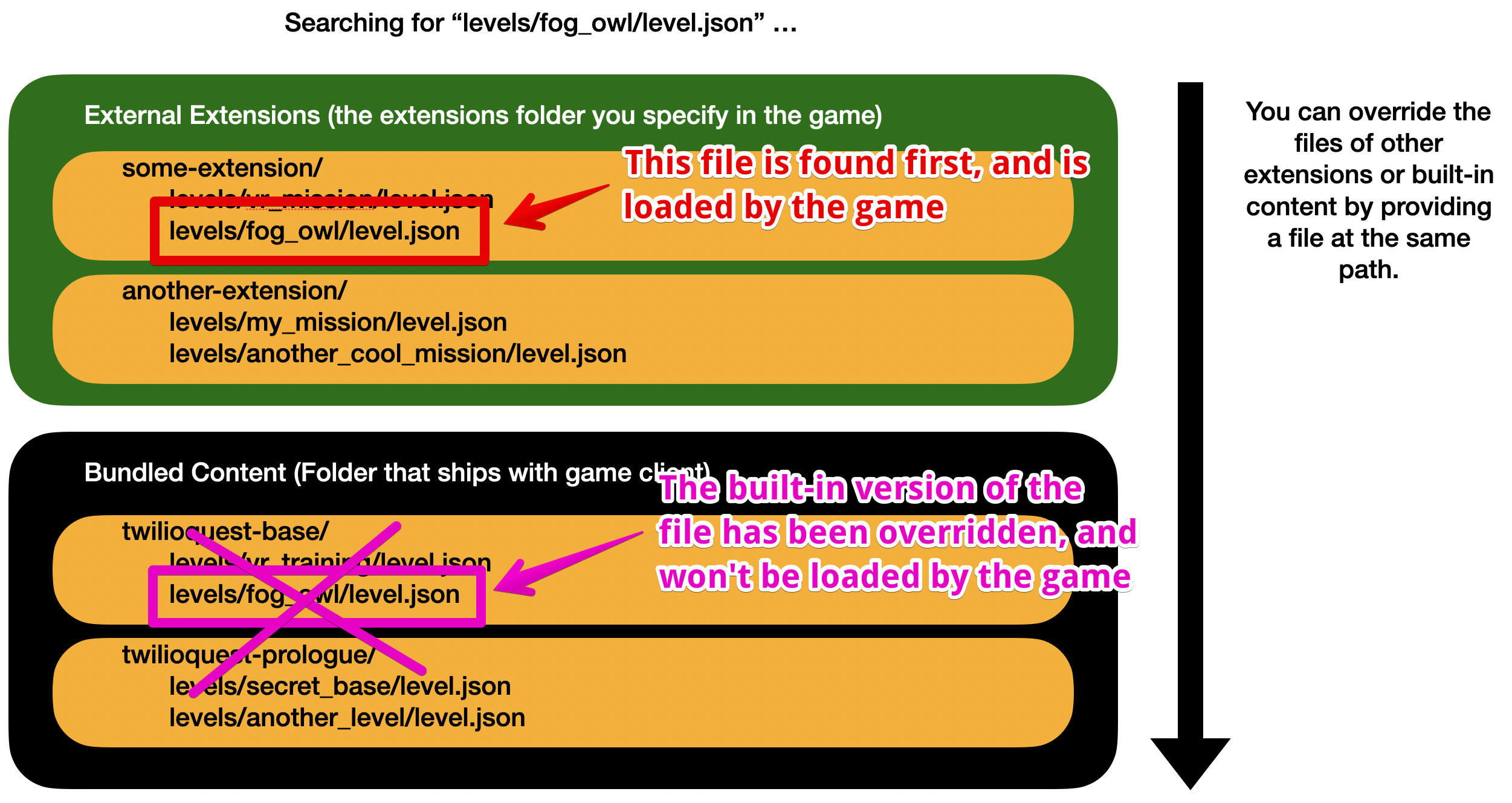